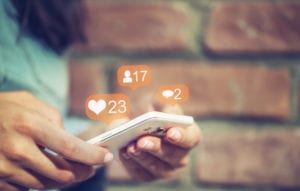 Numerous studies have linked social media with depression – but can your Facebook posts actually help predict if you’re depressed? That’s the question researchers set out to answer in a new study published in Proceedings of the National Academy of Sciences. Using a depression-detecting software algorithm, researchers reviewed more than half-a-million Facebook posts from 683 consenting patients to identify depression-associated language markers.

“Basically, we used the language people wrote on a daily basis and related it to whether they had a diagnosis of depression,” said study author Andrew Schwartz, an assistant -professor of computer science at Stony Brook University in New York, in a statement. The method was “slightly more accurate than standard screening questions in finding depression,” he said. The researchers were able to predict future depression diagnoses as much as three months prior to its appearance in the individual’s medical records as a diagnosed condition.

So what types of language patterns are linked to depression? A preoccupation with the self or using first-person pronouns – like “I” or “me” – in statuses and talking about feelings (sadness, loneliness, hostility), physical aches and pains and rumination, noted Schwartz.

That said, he warned against diagnosing your friends and family based on a few posts. The researchers reviewed six months of posts as well as health records prior to making any diagnosis.

So what’s the takeaway? An estimated 16.2 million U.S. adults have experienced at least one major depressive episode and yet fewer than 40 percent of these adults receive treatment. And with these high rates, it certainly couldn’t hurt to have a powerful tool like social media to screen for mental illness.

Seeking Addiction and Mental Health Treatment
When depression and addiction are present, treatment for both disorders is essential. Seabrook is a New Jersey based substance use rehab and co-occurring disorders treatment network. For a pre-admission assessment or to learn more about our programs, call today: 877-378-6708.