Polyproduct Pot Use Popular Among Teens

Polyproduct Pot Use Popular Among Teens

It’s not news that high school students are using pot – but how they’re using it might be changing, according to a new study.

A survey of more than 3,000 10th graders from 10 high schools in Los Angeles showed that while smoking pot is still the preferred method, kids are turning to edible and vaporized weed, too. Of note: California legalized medical cannabis in 1996, and in 2018, it became one of nine states to allow the sale for recreational use.

Tenth-graders were asked: “Have you ever used the following substances in your life?” Combustible cannabis (smoking marijuana or weed, hash, reefer or bud), vaping (liquid pot, dabbing or weed pen) or edible marijuana (drinks infused with THC, brownies, butter and oil).

The results: Of the 33.9 percent of students who reported ever using cannabis, smoking was the most popular, followed by edibles and vaping. Roughly 62 percent of those who had ever used cannabis used multiple products to administer the drug and nearly 8 percent had never smoked pot, but instead ingested cannabis via edibles or vaping.

This polyproduct use is disturbing for multiple reasons, noted study researchers. For one, pot use during adolescence has been study-proven to increase the risk for chronic use throughout adulthood, addiction and impaired cognitive development, said study’s senior author Adam Leventhal. 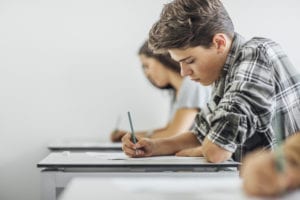 And using multiple products, including novel products like cannabinoid-infused gummy bears or energy drinks, could be drawing in youth who might otherwise be deterred. There’s less perception of harm – with no telltale sign of smoke and no harshness in their lungs – and less detection (no bags of weed for parents to fine), Leventhal said.

The researchers fear these findings could be an early warning sing of a trend that will only grow as more states legalize marijuana.

Ask About Our Young Adult Track
If you or someone you love is abusing marijuana, don’t wait to get help. At Seabrook, our young adult program provides a fresh start for clients ages 18 to 24 who are facing addiction disorders. To learn more about your treatment philosophy for young adults, call today: 800-761-7575.