“E” Is For Ecstasy

“E” Is For Ecstasy 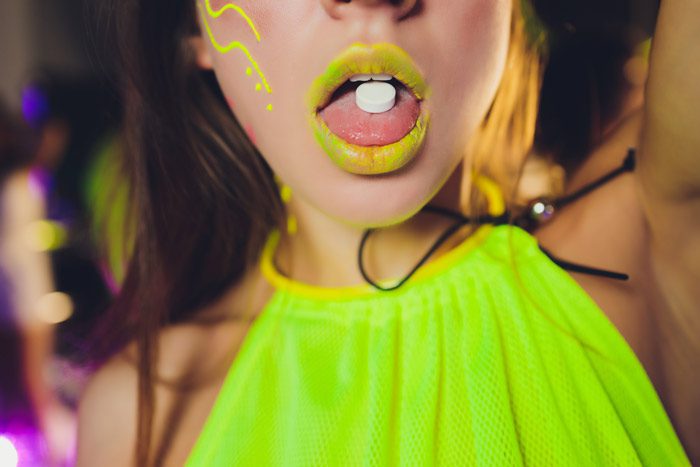 Chances are, you’ve heard of the drug “Ecstasy.” It was a pretty hot topic a few years back, and it’s still a potent, and illegal, substance in use today. The name itself conjures up some pretty, well, ecstatic thoughts. But as you’ll see below, its name belies its negative effects.

They call it ecstasy for a reason.

Have you ever looked up the actual definition of “ecstasy”?

The thing is – because of course, there’s always a thing – there are a whole lot of other feelings and health risks that come along with taking Ecstasy. And the negative effects absolutely cancel out any lovely feelings – and then some.

Let’s Start With the Science

Ecstasy’s chemical name is “3,4-methylenedioxymethamphetamine,” or as is more commonly known in chemistry circles, “MDMA.” It’s an amphetamine derivative, which basically means it’s a synthetic substance, not a natural, plant-based one. And it’s based on the chemical make-up of an amphetamine.

The fact that it’s synthetic is a big deal. It means that it’s synthesized in laboratories (not legal or public ones) by altering the structure of the amphetamine molecule.

This means that its make-up varies dramatically from lab to lab. It also means that other dangerous compounds – like heart-rate-increasing ephedrine and hallucinogens like ketamine – can easily be added.

If you’re a scientist or chemist, or just really like to read this kind of information, you can click here to learn more about its chemistry.

MDMA is more commonly known as “Ecstasy,” “E,” “Molly,” “XTC,” and “M&M.” It’s most widely known for use at dance clubs, night clubs, and raves – which is why it is also called a “club drug.” It’s both a stimulant and a hallucinogen – both of which are very attractive if you’re looking to go out and meet new people or party late into the night.

It’s also known as an enhancement for sexual experiences. Ecstasy lowers inhibitions and heightens the senses – both of which can be quite attractive if you want to stay in for a night of physical intimacy. (Please note that using Ecstasy or any drug as part of your sexual life comes with serious risks, and the relationship between drugs and viral infections is significant.)

After years of research, we know that some of these good feelings can result in some pretty negative consequences. In both the short term and long term, Ecstasy can do serious damage to your body and your mind.

For example, using Ecstasy even once can cause:

Not So Ecstatic About Ecstasy

Regardless of its name, or its uses at clubs or in bed, Ecstasy is much like any other drug that alters mood and perception.

It might feel good in the moment – but it also creates some very scary and dangerous moments. Once the moments are over, and with continued use, the physical and mental price you pay can be extremely high.

Substance use disorder (SUD) is the persistent use of drugs regardless of significant harm and adverse consequences. It is characterized by numerous mental, emotional, physical, and behavioral problems, which include chronic guilt, the inability to stop using despite repeated attempts, and physiological withdrawal symptoms.

Ecstasy is one of the drugs that can lead to substance use disorder.