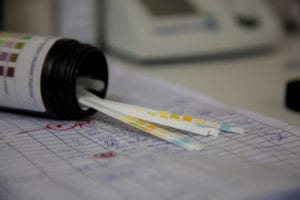 A new tool has emerged in the fight against opioid overdoses – but it’s a bit controversial. It’s the fentanyl test strip, which allows people to test whether drugs like cocaine or heroin are laced with fentanyl.

Originally developed by a Canadian biotech company to test urine samples for the presence of fentanyl, the strips work similar to a pregnancy test. One line on the strip means positive for fentanyl. Two lines indicate a negative result. The strips are activated when dipped in the residue of cooked heroin or when a little water is added to empty baggies of cocaine.

“We are at a pivotal moment in the overdose epidemic, and we need to embrace the full range of interventions that can save lives,” Susan Sherman, a co-author on the study, said in a news release.

Fentanyl is now considered the deadliest drug in America, linked to nearly 29 percent of all overdose deaths in 2016, according to the CDC. This is because it’s super potent (80 to 100 times stronger than morphine), inexpensive and often mixed into other street drugs without the buyer even knowing.

Still, some experts warn that these test strips may create a new set of problems. For one, they don’t identify all forms of fentanyl and don’t let users know how much fentanyl the drugs contain, so this can create a sense of false security. What’s more, these strips may prompt people to seek out drugs that contain fentanyl to achieve a stronger high, wrote Trump administration’s assistant secretary of Health and Human Services for mental Health and substance use Dr. Elinore McCance-Katz in a blog post.

“The entire approach is based on the premise that a drug user poised to use a drug is making rational choices,” she wrote. “Addicted individuals whose bodies demand that they find their next opioid to stave off withdrawal symptoms are not in positions to weigh all options and to choose to not use the only opioid at their disposal.”

Withdrawal Management at Seabrook
Managing withdrawal symptoms is often the biggest hurdle for individuals who begin rehab – and we can help. Whether it’s your first time in rehab or you are returning after a relapse, we can offer you the medical help and support needed to overcome withdrawal. To learn about our drug rehab treatment programs, call today: 877-371-7674.